US blue-chip stocks stalled on Tuesday after reaching a record high in the previous session, as investors locked in gains from the end-of-year rally.

The declines ended a four-day rally for both US indices, which have been whipsawed by choppy trading in December as investors balance a more hawkish Federal Reserve against rising Covid-19 cases in a month characterised by low trading volumes before the new year.

Investors had already begun to question the durability of the rally into next year, with inflation and energy prices rising.

Tech stocks led the move lower on Tuesday. Apple eased 0.5 per cent but remains within 2 per cent of becoming the first-ever $3tn company by market capitalisation.

In Europe, the benchmark Stoxx 600 closed up 0.6 per cent, around its highest point since November 19, led by defensive utility and healthcare stocks. Prosus and Just Eat Takeaway were among the biggest decliners, down 3.1 per cent and 2.2 per cent respectively.

Investors saw the positive side of news that neither England nor France would impose tighter coronavirus restrictions for New Year’s Eve. Nevertheless, France toughened working-from-home rules to stem a surge in Covid-19 cases. 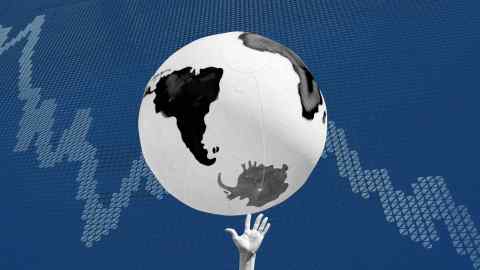 The Cac 40 share index in Paris moved 0.6 per cent higher and the Dax 40 in Frankfurt rose 0.8 per cent. Still, trading was light during the festive period. The London market was closed and will reopen on Wednesday.

Crude oil remained close to a one-month high as investors bet that demand would not be deeply curbed by Omicron, although prices gave back half their gains earlier in the day. Brent crude, the global benchmark, rose 0.4 per cent to $78.94 a barrel.

Cryptocurrency-related stocks fell as the price of bitcoin slid below $50,000. Coinbase, the digital asset exchange, and MicroStrategy, the software company that owns more than 120,000 bitcoin, both fell more than 6 per cent.

The dollar index, which measures the US currency against six others including sterling and the euro, oscillated between positive and negative territory and was last up 0.01 per cent.

Robert Armstrong dissects the most important market trends and discusses how Wall Street’s best minds respond to them. Sign up here to get the newsletter sent straight to your inbox every weekday