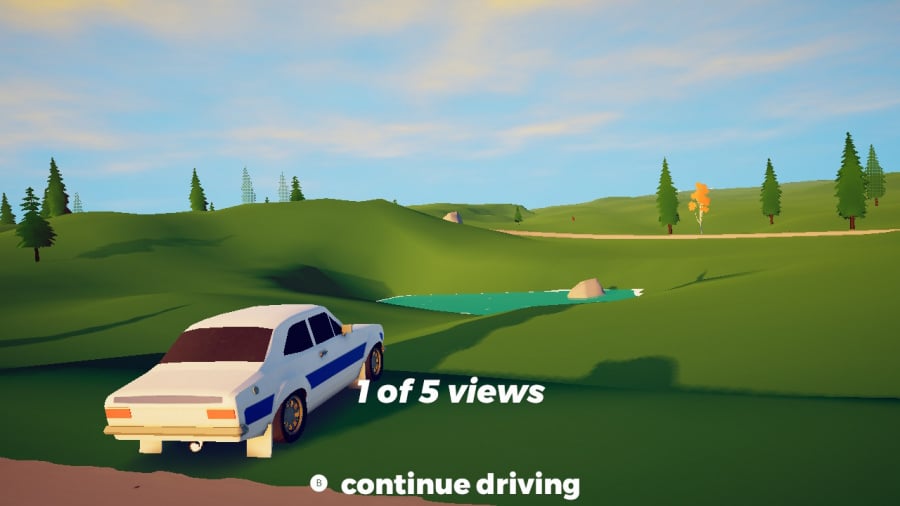 Funselektor Labs’ art of rally looks like it should be the most accessible rally sim of all time. Its bright colours and abstract environments almost create a false sense of security, distracting from an otherwise remarkably deep and challenging rally title. It retains the same authentic gameplay from its original PC release, but in moving over to the Switch the game has undergone some notable graphical downgrades.

Launching the game for the first time you’re greeted by a large totem character, who briefly addresses you before you’re sent off to roam about the land. This is pretty much the only time the game strays into more fantastical elements, and it’s a bizarre way to kick off an otherwise pure driving title. Once you start cruising around the initial free-roam location, however, it quickly dawns on you that this isn’t your run-of-the-mill arcade racer; this is an authentic take on rallying that may prove to be quite the shock for more casual players.

The free-roam locations are a good way to test your skills before you take on the races themselves. Littered around the environment are cassette tapes (which we’ll touch on a bit more shortly), photo opportunities, and letters that spell out R-A-L-L-Y; finding all of these will unlock more free-roam locations for you to wander. In addition to the photo opportunities, the game also comes with its own photo mode, meaning you can pause at any point and line up the camera for the perfect shot.

Photo mode does, however, highlight how much the Switch version of art of rally has been downgraded in terms of its visuals. In many ways the game is absolutely beautiful, particularly when the sunset pierces through the trees and lights up the track ahead. Generally, however, many of the game’s assets have been cut altogether. Trees that were visible on the PC (and now Series X/S) version of the game have disappeared, and the grass is nowhere to be seen, leaving the ground looking like a bland block of colour. The game’s framerate also takes a hit, running at 30FPS compared to the comparably smoother 60 on other platforms.

On the plus side, though, the incredible music has migrated over in its entirety, and this is where the presentation truly shines. The banging tunes make cruising around the tracks or free-roam environments an absolute joy. The collectible cassette tapes found in free-roam mode also unlock more music tracks, and we’d be hard pressed to choose a favourite out of the bunch.

The gameplay itself feels incredibly authentic considering the abstract nature of the presentation. Steering your vehicle around corners can be tricky, and the slightest instance of oversteer can cause you to careen off the side of the road. Stray too far, and the game will automatically recover your vehicle, adding a 5 second penalty onto your time. Mastering the controls can take a while when compared to other rally titles with a similar top-down approach, but the gratification gained from this is undeniably greater.

Despite its obvious visual shortcomings art of rally is still a nice looking game regardless; the gameplay, of course, shines through brightest, making this one of the most authentic, challenging rally titles in some time. The incredible music makes the price of admission worth it alone, and if you’re after a surprisingly nuanced, deep rally game, this is the one to go for.