How Hamilton has lifted Norris’ self-belief: on and off track


Despite all he has achieved in his motor racing career, and especially amid what has been a stellar 2021 campaign, he is not one to let himself get carried away and believe that he is infallible.

What this season has delivered though are opportunities and experiences to help Norris wipe away much of the personal negativity he sometimes still (wrongly) has about himself.

And there is no better example of that than the way he so brilliantly held on in front of Lewis Hamilton as they battled for what was then second place in the Austrian Grand Prix.

While Hamilton clearly had the faster car, Norris was superb in his defence: making no mistakes with his inch-perfect driving to hold on for as long as he could before he knew that discretion was the best part of valour.

Quickly realising that holding Hamilton back any longer was only going to serve to wreck his own race, he duly made it easy for the Mercedes to find a way past.

It was a 15-lap experience that not only earned Norris praise from Hamilton – who famously tipped his hat to his fellow Brit over the team radio – but equally served as a moment that proved to the youngster he could cut it in wheel-to-wheel battles with the very best.

“I think it was valuable, and I think it’s something that will definitely help me out in the future when I’m in those kinds of situations again,” explains Norris.

“And it’s just reassuring to know that if I am there in the future, if I am in that position again, I’m able to compete there and be able to beat him in different scenarios.

“It doesn’t make me believe all of a sudden I can win races and I can achieve greatness. You know, it doesn’t change like that. But it’s just when I’m in that position again, I know what I’m capable of doing against someone like Lewis.” 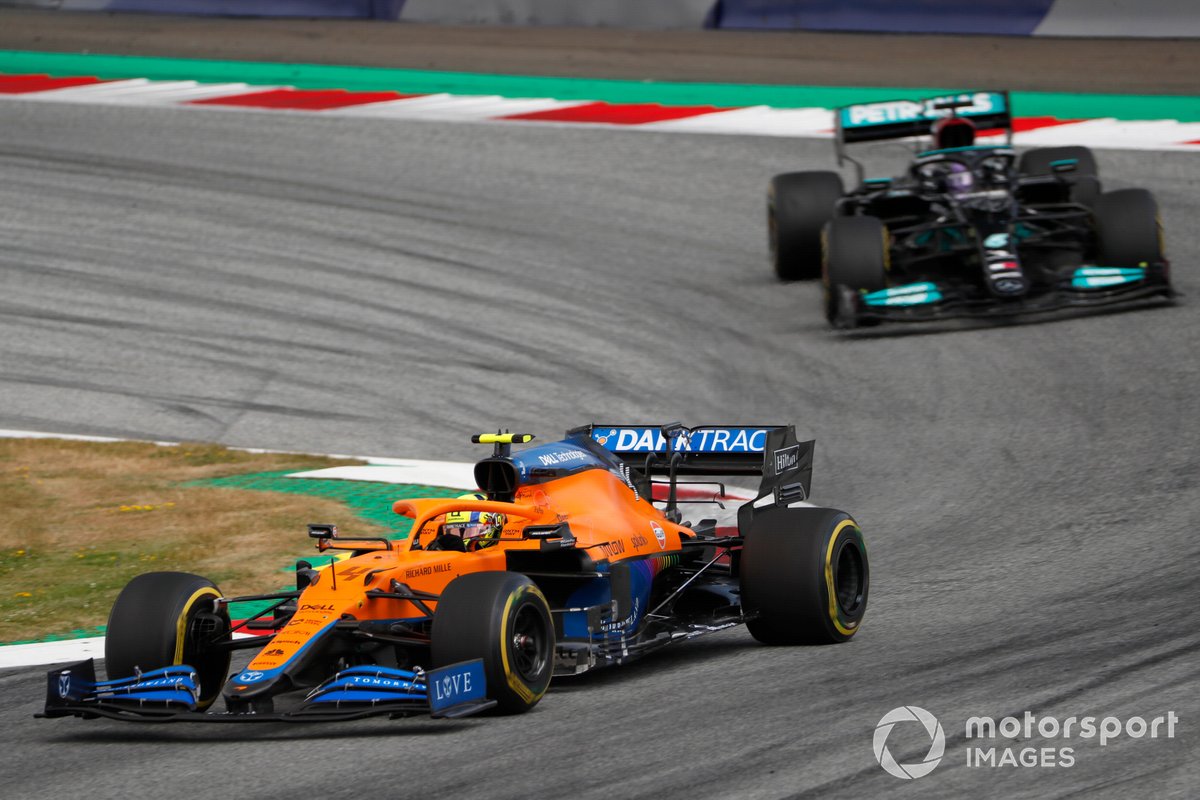 What made the Austria battle so important was that it wasn’t just a fight for a position that was inconsequential: it was second on the road. So there was an extra element to not giving it up.

“The fight is with Mercedes, and it’s Lewis, which maybe puts that little bit a more pressure on you,” added Norris.

“I’ve been racing people since day one and whenever you have someone behind you, no matter who it is, and they’re quicker than you, you always feel pressure, you always feel like you don’t make mistakes, and so on.

“But, of course, in Austria I was fighting over third or second position at the time, so that also acts as an added pressure to it.

“I don’t think the fact that it was Lewis changes everything, and it’s like, ‘Oh my God, what do I have to do now?’, but it makes a very small difference, because you know he’s one of the best drivers in the world and ever in Formula 1.

“So you know, he’s going to be thinking about every opportunity on how to maximise and how to get past me. So any slip up I have, makes me more vulnerable than if I’m racing against probably anyone else in that situation.

“So it just forces you to be even more perfect, to concentrate even more and things like that. Which I was able to do for 20 laps until I thought, I’m just ruining my own race now and I got to let him go.

“So yeah, it’s more reassuring, and gives me good confidence in the future when I’m in that position again of I’m racing Lewis or Max or whoever, that I’m comfortable that I can perform well.

“I’m not gonna say I don’t make mistakes under pressure, because I’m sure I will. But I can perform very well and not easily make that mistake or give something up that easy.” 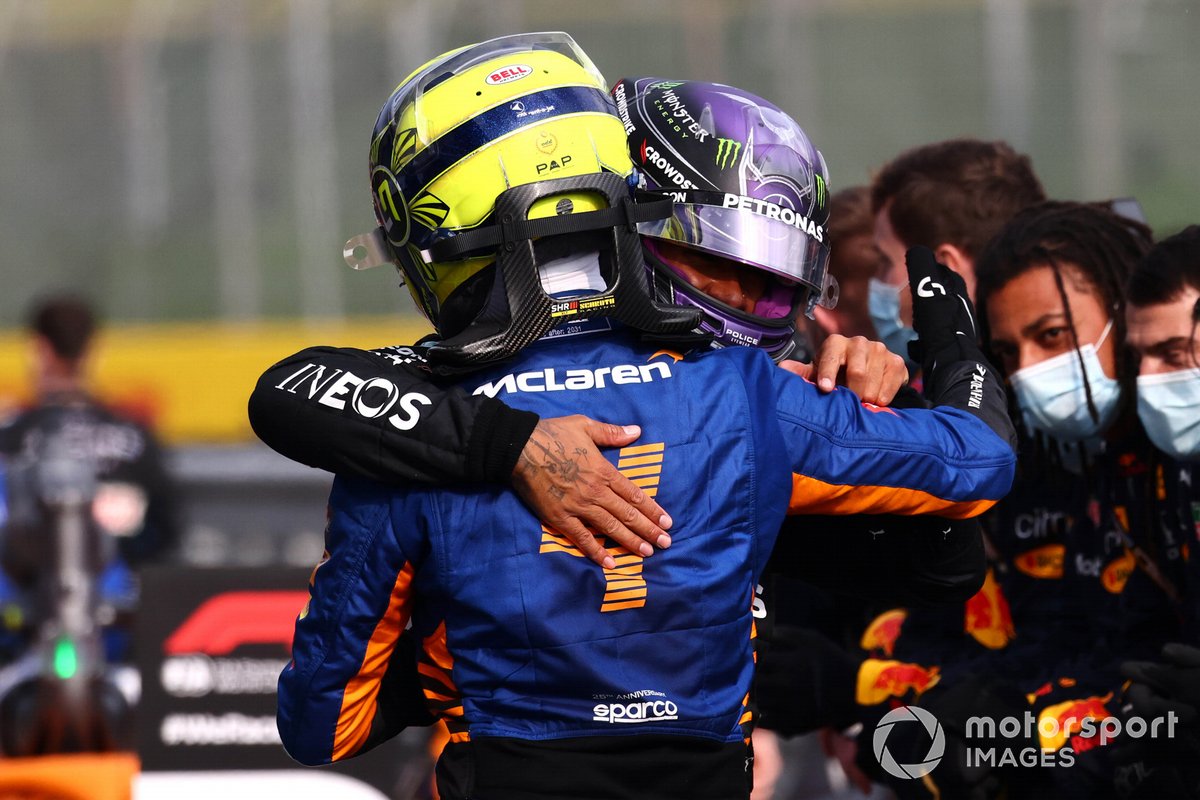 Ticking off the assuredness he has now about being able to battle with F1’s top tier drivers is not the only thing Norris has taken away from 2021 so far though.

There was the podium at Imola on a weekend when a track limits penalty cost him a front row start, plus a brilliant unexpected third in Monaco before that effort in Austria netted him another top three spot.

He senses this growing confidence has been a factor in that remarkable run of 15 consecutive points finishes in F1, which only came to an end when Valtteri Bottas pitched him into the side of Max Verstappen at the opening corner of the Hungarian Grand Prix.

“My confidence level, through a lot of different scenarios this season, has definitely gone up and it’s been very good for me, I think,” he explains.

“Especially after the first couple of races, in a way I made a good step, because I did well in qualifying, did well in the races, we had pace, like in Imola and so on, which gave me that big confidence booster.

“Then there’s these little things along the way, which kind of add to it. And Austria was just another thing, which just added to that confidence and allowed me to think, ‘Okay, you know, I can do this, and I can do that’.

“And I can have that belief in myself and that confidence in myself. Because I always fret, I’m afraid to have it in a situation that I’ve never been in before.

“So when you experience these different things, and you kind of confirm to yourself that you’re capable of doing something, then I can add it to my bank and that adds to that confidence.

“And through experience, of course you always keep learning more and more, but you get to a point when all this confidence is kind of building up to being in the position you’re in. And there’s no massive ladder you still need to climb to get into Formula 1 or whatever, like, you’re there.

“So yeah, these kinds of things are coming together this season. And there’s still some things I’m not super confident in myself in. But compared to last season, compared to my first race in Formula 1, it’s a completely different level, and I feel much better about it.” 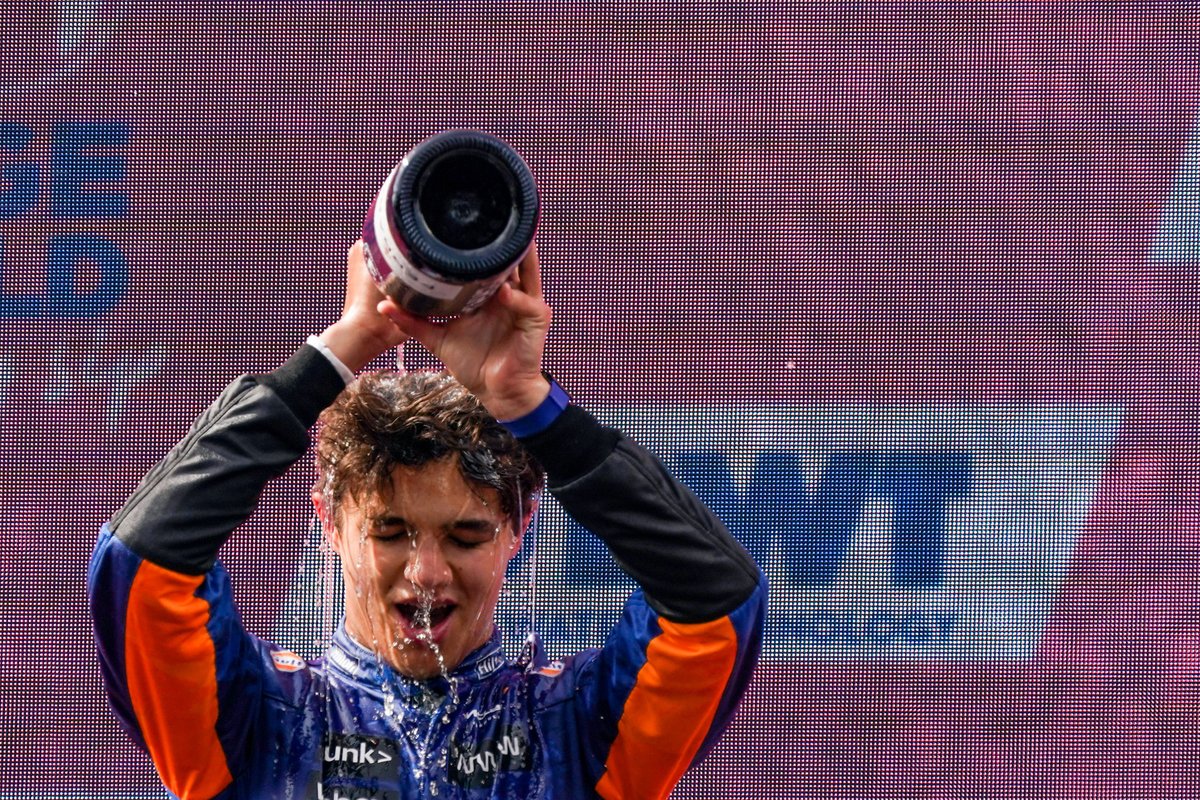 But the confidence he is gaining it not just about on track stuff too, for Norris has grown off it too.

With his arrival as a podium finisher in F1 coinciding with the coronavirus pandemic, it means Norris’ standing as a fan favourite never really became obvious.

All that changed at the British Grand Prix when a full-capacity crowd was allowed in. For Silverstone was no longer all about Hamilton, as there was a very strong presence of the Norris orange army.

Norris merchandise sold out, and there even was a grandstand packed with members of his personal Quadrant Esports/streaming club.

And again, just as Hamilton has been a reference on track, so too Norris hopes that he can help use his fans for a greater good just as the seven-time world champion has done.

Asked about facing up to the reality of the huge support he had at the British GP, Norris said: “It’s something I’m still coming to grips with.

“It’s something that still is surprising and unbelievable in some ways to think, whatever, five years, six years ago, that I wanted to be in this position and seeing the grandstands with my caps on, and my T-shirts on, and the Quadrant flags and things like that. 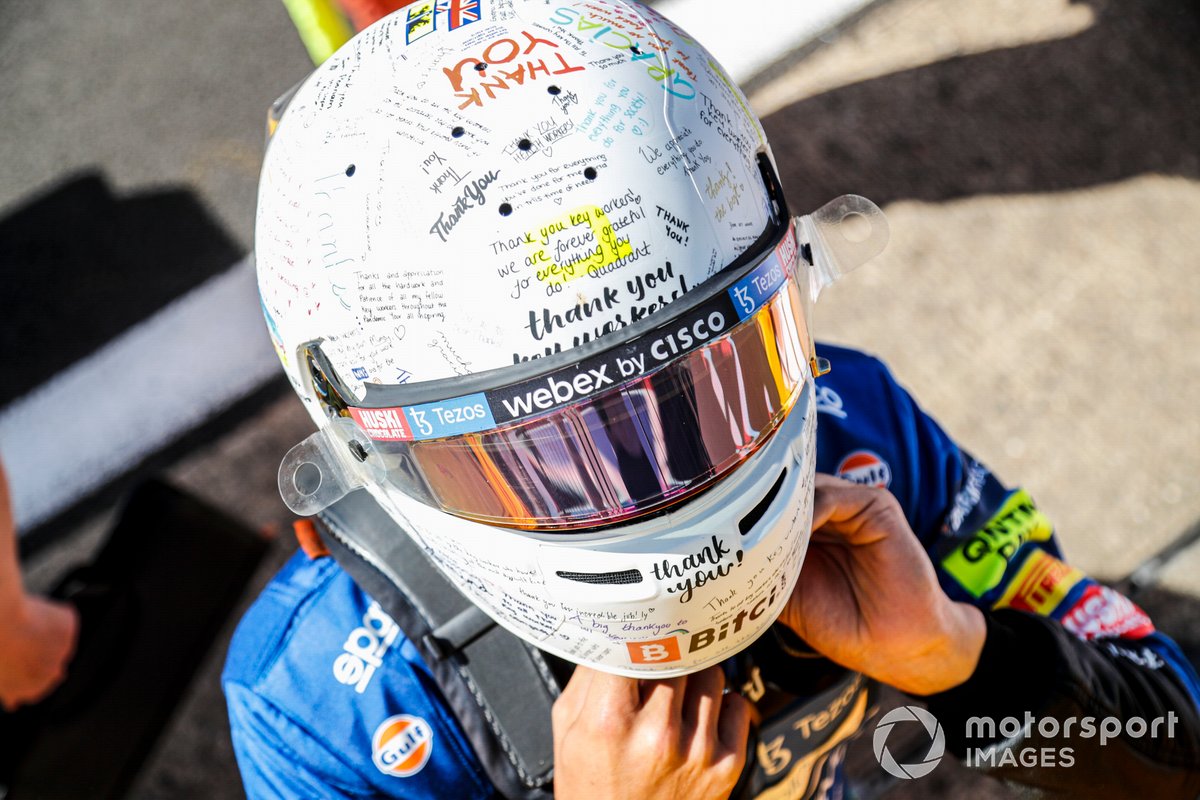 “You never think that that’s going to be you. And I know it is, so it’s a bit unbelievable in some ways, and I’m still getting to grips with.

“It’s still something that Lewis does very well, because he’s been in it for so long and so on. He’s used his fans, not used in a bad way, but used them to make change and cause impact and things like that.

“It’s something which I’ve been able to do with Quadrant, on mental health with some things I’ve done, plus charities I’ve done on my streams. So I’ve been able to use my fans and help guide them and use them to impact things and hopefully for better reasons than not.

“So yeah, it’s just such a cool feeling. It’s an unbelievable feeling until you kind of come and see it and get to witness it. So it’s pretty incredible.

“Hopefully it will continue to grow and get bigger and I will see what I can learn from it, and try and use to make even bigger impacts like Lewis does.”

On and off track then, Hamilton is showing to Norris that he is right to believe in himself, as he bids to finish the second half of the 2021 campaign in the superbly strong way he started it. 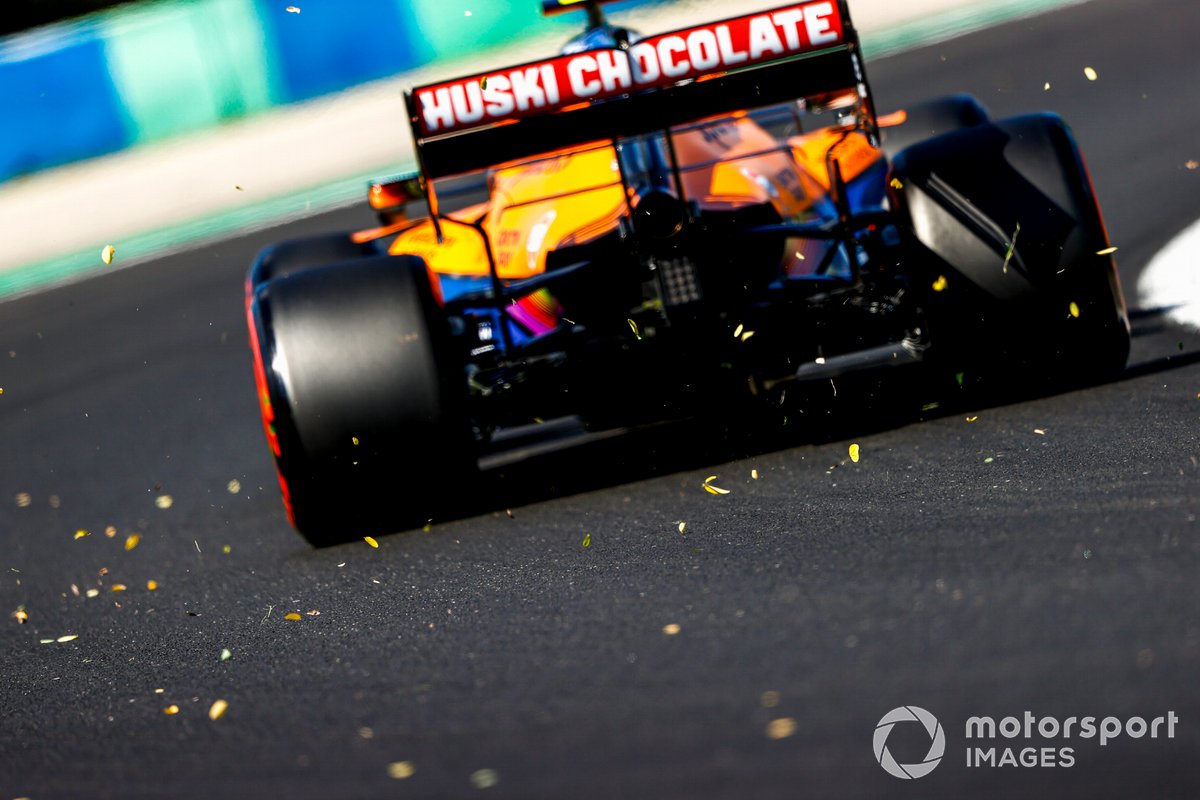 Oct.21 - Las Vegas, the fabled casino capital of the US, could be the next host to be added...
Advertisment