Thoroughbred Makeover Diary: Highs and Lows With Pied, But Living a Dream 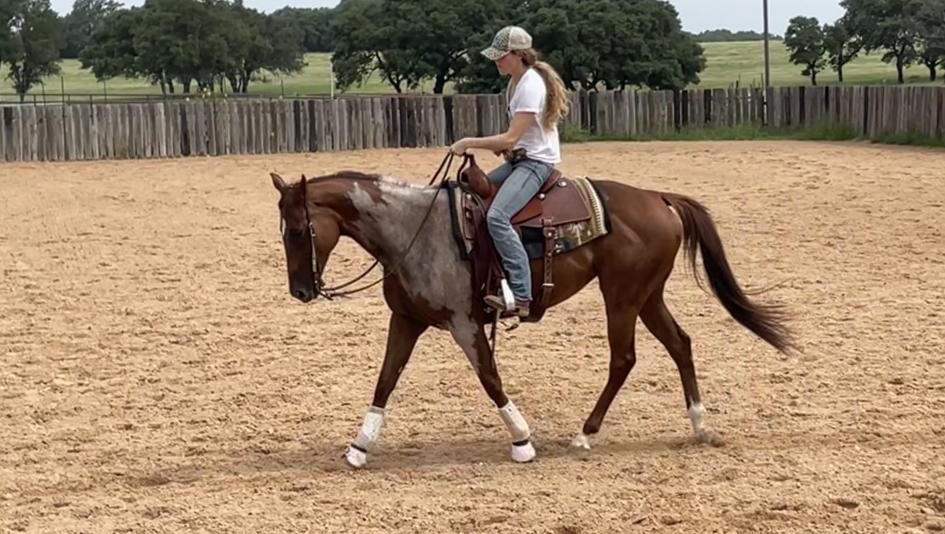 To be honest, I had a lot of hesitation sitting down to write this blog post. After our experience at the horse show, I felt that I had nothing new to report. And up until a week ago, I was convinced I would be writing about overcoming injury, every horse girl’s worst nightmare. Looking back on this month after some of the massive milestones we experienced in months’ previous, I got anxious thinking that the Makeover is quickly approaching, and nothing stood out!

But after sitting down, having a glass of wine, and reflecting on the few weeks since our last entry, June may have been our most productive time yet.

In another hobby of mine (yes, I TRY to live a balanced life …) if you have a “first,” whether you accomplish something for the first time or you screw up for the first time, you owe a case of your favorite drink to your buddies in the sport. Let’s just say, Pied and I owe some drinks!

Coming back from the horse show, I felt like both Pied and I matured. Horse showing is something I’ve done sparingly throughout my life, and it was Pied’s FIRST, so both of us came out of that weekend knowing each other better, learning the sport of reining and its atmosphere, and just how to survive five days away in that environment.

We both came home ready to work, and I felt massive improvement in our work ethic and compatibility.

I was struggling in asking Pied for her left lead. Playing around, it never seemed to be an issue. But when I started asking her to pick it up when I specifically needed it, it seemed impossible. Now, I’m not sure of the correct term in dressage, but I’m fairly certain Pied now has the world’s best counter canter. In kindly asking for the lead, the lead change, or any inkling of a shift toward the left lead, I became confident in saying that if she was human, she would be heading to the Olympic Games for gymnastics … she is ATHLETIC!

Everyone take a second, pick up your glass, and cheers to great trainers! They were able to train ME how to ask her correctly and, though I know horses off the track frequently have issues with their left lead, I also have been around these animals long enough to realize it’s usually the rider’s issue in clear communication. Pied is brilliant and quickly realized what we were asking for and has been more than willing to pick it up right away. She thinks the Olympics might be too much work, after all.

The Makeover will mark the FIRST time I am training for a specific show in a specific event with a specific horse. However, the Makeover is just the beginning and I have many more goals with this fabulous mare.

We have been working on controlled gaits, read off my seat … faster when I post the trot or lean forward at the lope, slower when I sit back deep in the saddle. “Feel like you’re melting back into the saddle, Meghan,” is a sentence that I may as well get tattooed on my wrist at this point. I’m arguably more high-strung than any redheaded mare, so the fact that Pied has learned to adjust to my seat is a reminder of what a quick and honest learner she is.

Another exciting FIRST is our saddle! Being the broke amateur I am, I refused to admit that my saddle may be contributing to my awkward position. All my fellow Texans are probably aware of the great Tesky’s. My mom and I took a trip up to Weatherford to saddle shop, and I’ll be darned if I didn’t die and go to heaven when I stepped foot in that shop. The smell of new leather, saddles as far as I could see, and everything I could ever imagine wanting to buy for my horses. I finally replaced my boots as well. No more wet socks!

All these little accomplishments and new tack were thrilling; I felt like everything is and would be coming together. Until one morning, I walked into the barn, pulled her out, and WHAM! Swollen leg.

I think we can all relate to the gut-wrenching, sickening feeling you get when you find your horse injured as well as the immediate process of discovering what could possibly be wrong. I felt up and down her leg and found minimal heat, but enough to send me into a panic. She trotted sound, but we all know that could mean nothing in the world of horse injuries! I called the vet, made an appointment, sent videos, and started an aggressive treatment of wrapping, PEMF, and icing.

As days went on, the heat was gone but the swelling was still there. We hauled in –

another FIRST, never had I ever hauled a horse alone – got an ultrasound and every lameness exam possible, and nothing was found. Ultimately, she had excess fluid around her tendon sheath most likely from kicking the wall at her handsome boyfriend, Concho, when she was in heat. MARES!

The horse ALWAYS comes FIRST, so she had ample time off, all the PEMF treatment and chiropractic work she needed, and countless other spa sessions.

I’d be lying if I said I wasn’t sad. So much rides on our horses’ backs. We put our own dreams and aspirations on them. Our human ego soars thinking about all we can accomplish. It was a reminder that our horses show up every day for us, without an ego, and literally do what we ask of them with no questions. It is my job to make her life the best horse life possible.

So, looking back on June, it was filled with high highs and low lows.

As I sat on her back this morning on our first ride back post mini-vacation, I couldn’t help but just be grateful for Pied and our journey together so far. I have stood in the winner’s circle with her when she won her first race, and I have brushed her tail out in the equine hospital shortly after she got out of colic surgery. I’ve ridden her proudly at shows, and I have laid with her as we both took a nap in the cold sun after hacking out her iced-over water during the great Texan freeze. There is nothing I wouldn’t do for Pied, and in my reflection, I realized that if my 10-year-old self saw where I was now with these mares, she would say “you’re living your dream.”

Find us at the Makeover and there will be plenty of Pied’s favorite beverage for you all … Gatorade!

To get a roundup of TechCrunch’s biggest and most important stories delivered to your inbox every day at 3...
Read
Business

Over the weekend, COVID-19 cases continued to surge across the country with Florida experiencing record daily highs of new...
Read

To get a roundup of TechCrunch’s biggest and most important stories delivered to your inbox every day at 3 p.m. PDT, subscribe here. Hello...

Traders on the floor of the New York Stock ExchangeSource: NYSEStock futures rose slightly in overnight trading on Monday after worries about slowing...

Over the weekend, COVID-19 cases continued to surge across the country with Florida experiencing record daily highs of new cases and hospitalizations. The...

To get a roundup of TechCrunch’s biggest and most important stories delivered to your inbox every day at 3 p.m. PDT, subscribe here. Hello...
Read more

Traders on the floor of the New York Stock ExchangeSource: NYSEStock futures rose slightly in overnight trading on Monday after worries about slowing...
Read more

To get a roundup of TechCrunch’s biggest and most important stories delivered to your inbox every day at 3 p.m. PDT, subscribe here. Hello...
Read more

Traders on the floor of the New York Stock ExchangeSource: NYSEStock futures rose slightly in overnight trading on Monday after worries about slowing...
Read more