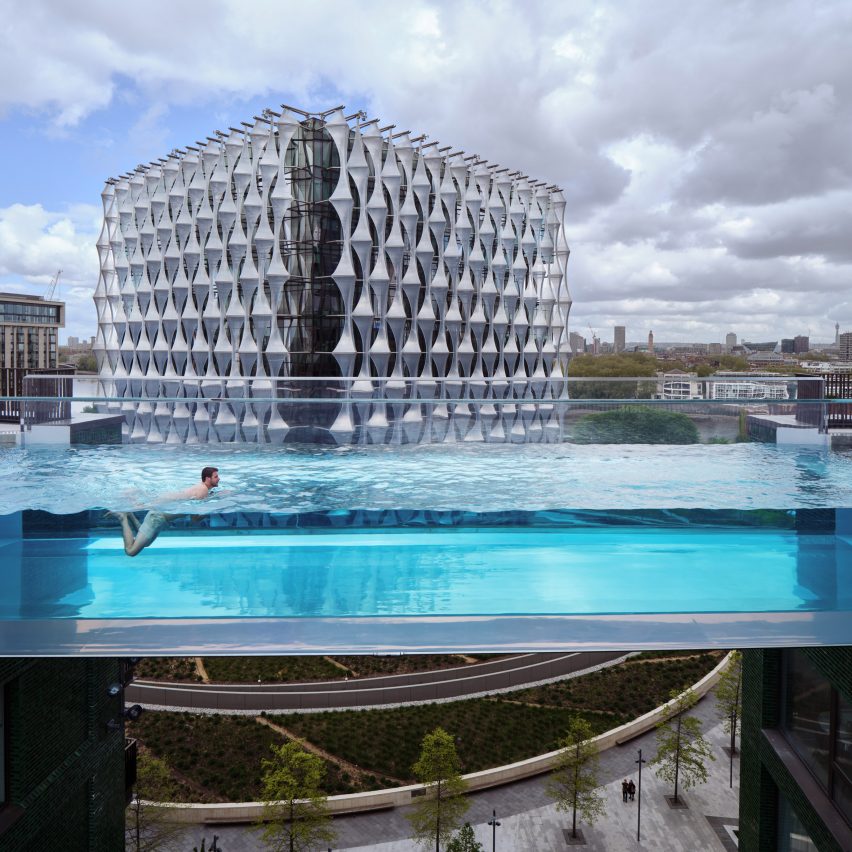 Named Sky Pool, the 25-metre-long swimming pool is made entirely from acrylic panels, allowing swimmers to look directly down to the ground 35 metres below.

HAL designed the pool, described by the studio as the world’s first, to be a structure with “a sense of fun” that gives people “a swim like no other”.

However, the project has caused controversy because the pool is not accessible to the affordable housing residents within the development.

Financial Times architecture critic Edwin Heathcote called the pool “a disaster that’s already happened”, while Guardian critic Oliver Wainwright tweeted: “A reminder that the affordable housing residents of this development, whose windows look straight onto the pool, are not allowed to access it.”

“We wanted to produce a swimmable bridge – a lightweight structure spanning between two buildings with swimmers able to take advantage of fantastic views over London,” explained HAL founder Hal Currey.

“It’s the transparency, the lightness of touch and the fact that it’s straddling two buildings that makes it unique – and it captures the imagination, the fact that swimmers can see the ground and people below can see the sky,” he told Dezeen.

The bridge spans 15 metres between the 10th floors of two residential blocks that were recently completed alongside the Kieran Timberlake-designed US Embassy in Battersea.

Designed by HAL, the blocks form part of developer EcoWorld Ballymore‘s 15-acre Embassy Gardens estate, which was master-planned by UK architecture studio Farrells and wraps around the embassy building.

Working with structural engineers Eckersley O’Callaghan, HAL wanted to create a structure that was fully transparent.

“The intention was to keep the design simple,” said Currey. “We wanted it to appear as transparent and effortless as possible,” he continued.

“The lack of visible structure gives the Sky Pool a magical quality – a sense of drama for swimmer and spectator alike.”

The team’s preliminary designs combined glass and steel, but this resulted in structures that had too many solid elements.

“Transparency was a brilliant aspiration but also a real headache,” explained Currey.

“Early studies developed a part solid, part transparent solution, which felt like a compromise,” he continued.

“The big idea – a brilliantly transparent vessel shimmering between two buildings – would be entirely lost.”

To create the effect of complete transparency, the design team settled on creating the Sky Pool from acrylic panels, which are more often used to create large tanks at aquariums.

“Large, thick transparent slabs of acrylic were already being used in giant aquaria around the world,” said Currey.

“If acrylic could hold back sharks, could it be applied to a swimming pool structure ten storeys up?”

The structure was made and installed by fabricators Reynolds Polymer Technology from large panels of acrylic.

According to the design team, the material has the additional benefit of having a refractive index very similar to water so there is only a little distortion of light through the material. This helps the structure appear more invisible.

As the pool spans between two blocks, it was designed to respond to the movement of the buildings while supporting the weight of water and being impacted by wind due to its height.

It was built within steel tubs on each of the two buildings, which also incorporate steps, cleaning equipment, a roller cover, water treatment and lighting.

These tubs are supported on bridge bearings that allow the structure to move in all direction as the two buildings move.

Two 38 millimetre diameter steel rods run under the pool to connect the two steel tubs to reduce loads on the acrylic structure.

Now complete, the Sky Pool, along with spa, gym, private cinema, indoor pool and co-working spaces is open to residents of the Embassy Gardens development that pay into the higher service charge across the estate.

According to the Guardian, the residents of the affordable housing within the block have not been allowed access to the pool or other amenities and are not given the option to pay extra to use them. Affordable housing in the development is also accessed by separate doors known as “poor doors” leading to residents being “made to feel inferior”.

Other unusual pools on Dezeen include the longest cantilevered swimming pool in Europe, which is currently under construction in Spain, and a glass-bottomed pool in Honolulu.

Photography is by Simon Kennedy.

The post Fully transparent Sky Pool provides "a swim like no other" between two housing blocks in London appeared first on Dezeen.

London is expanding 4G mobile coverage across the entirety of the underground. The network, which will span every station...
Read
Design

British engineering firm Rolls-Royce has laid out how it will achieve net-zero carbon emissions by 2050, including modifying its...
Read

British engineering firm Rolls-Royce has laid out how it will achieve net-zero carbon emissions by 2050, including modifying its...
Advertisment

Insilico Medicine, an A.I-based platform for drug development and discovery announced $255 million in Series C financing on Tuesday. The massive round is...

London is expanding 4G mobile coverage across the entirety of the underground. The network, which will span every station and tunnel on the...

British engineering firm Rolls-Royce has laid out how it will achieve net-zero carbon emissions by 2050, including modifying its jet engines to run...

Insilico Medicine, an A.I-based platform for drug development and discovery announced $255 million in Series C financing on Tuesday. The massive round is...
Read more

London is expanding 4G mobile coverage across the entirety of the underground. The network, which will span every station and tunnel on the...
Read more

Insilico Medicine, an A.I-based platform for drug development and discovery announced $255 million in Series C financing on Tuesday. The massive round is...
Read more

London is expanding 4G mobile coverage across the entirety of the underground. The network, which will span every station and tunnel on the...
Read more