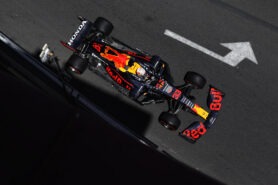 Charles Leclerc scored his 4th F1 pole position of his career, during the 2021 Azerbaijan Grand Prix qualifying session today. The Ferrari driver will start from P1 for the first time in Baku. It was the 230th pole for the Ferrari F1 team.

Max Verstappen’s car was fixed quick enough to take part this qualifying session after the Dutchman crashed in turn 15 during FP3. George Russell was less fortunate after his engine’s water pump failed in the back of the Williams. The mechanics were still very busy fixing the car at the start of Q1.

Q1
Charles Leclerc was the first to set a lap time. The Ferrari drivers used soft tyres and clocked a 1:42.532. Both Mercedes cars were the only ones that used the medium tyres in their first stint. Just after Leclerc completed his first lap Lance Stroll hit the wall at the notorious turn 15 with the Aston Martin. The Canadian driver demolished the complete right front of the car and had to step out. This caused a red flag to recover the car.

For Williams and George Russell the red flag was quite fortunate and gave them enough time to be ready to take part in Q1 and try to make it into Q2. With 14:01 minutes left the session was restarted. Both Mercedes cars now were fitted with a new set of red tyres. Max Verstappen ended up as quickest in the Red Bull with the quickest lap of the weekend so far (1:41.760). 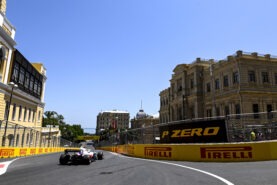 Not long after Verstappen completed his lap the second red flag was deployed due to yet again a crash in turn 15. Now it was Antonio Giovinazzi who hit the wall in Alfa Romeo. There was 9:22 min left on the clock while 10 drivers even were not’ able to get a lap time on the timesheet.

With 5 minutes to go the drivers in the dropzone were Russel, Nikita Mazepin (Haas) and Mick Schumacher (Haas). The other 2 places were already occupied by Stroll and Giovinazzi. Russell was able to improve enough to get into Q2 and even was 13th fastest in the just on time fixed Williams.

After being nowhere whole weekend Lewis Hamilton had found the sweet spot of the Mercedes again and drove a quicker lap time than Verstappen and put the Mercedes on P1.

Q2
With 5 minutes to go Verstappen was quickest with a 1:41.625 min. Perez was second on only 0.005s, Hamilton on 0.009s and Leclerc on only 0.0034s from P1. The drivers who had to improve to get into Q3 were Esteban Ocon (Alpine), Yuki Tsunoda (AlphaTauri, Daniel Ricciardo (McLaren), Kimi Raikkonen (Alfa Romeo) en Russel.

The top 7 positions were only 0.188s apart and Ricciardo pushed to much to get into Q3. He was going to quick in turn 3 and wrecked the right front into the barrier. The third red flag and the end of Q2 was the result.

Tsunoda had a great lap and improved to P4 and pushed out Aston Martin driver Sebastian Vettel.

Q3
After the first lap times were clocked Charles Leclerc was quickest. with a 1:41.218. Lewis Hamilton was 2nd on 0.232s and Max Verstappen was 3rd on 0.345s. Pierre Gasly drove an amazing lap in the AlphaTauri again and even was 4th before the last laps were driven.

The pole time of last Azerbaijan GP was a 1:40.495 min driven by Valtteri Bottas for the Mercedes back in 2019.

Previous articleApple, Google, Amazon, Other Tech Giants May Have to Pay Much Higher Taxes as G7 Nations Reach Landmark Deal
Next articleportable water station made of recycled plastic converts rain into tap water

Jennifer Aniston can hold a 10-minute plank, and—as with everything she does—somehow makes it look effortless. “My boxing trainer,...
Read

Williams announced earlier this month that Roberts would be leaving after less than a year in the role...
Advertisment

following the much-awaited debut of miuccia prada and raf simmons as co-creative directors of prada, the italian fashion house presented its SS22 menswear...

Jennifer Aniston can hold a 10-minute plank, and—as with everything she does—somehow makes it look effortless. “My boxing trainer, Leyon Azubuike, had me...