As I was chatting virtually with Intersectional Environmentalist founder, Leah Thomas last fall, it was a rainy day in Austin while the blue sky shined brightly in Ventura. Like any good thing in life, our conversation was evergreen and effortless. A midwestern girl at heart, Thomas’s passion for the planet and its people were immediately evident. She spoke about her co-founded movement, Intersectional Environmentalist with poise and grace—and her words were crystal clear. Our hour together was filled to the brim with stories about Thomas’s writing journey, her deep, personal interest in social justice, her desire to dismantle the very systems that are holding our society back… and so much more.

Her young spirit and old soul allow her to make otherwise intimidating topics accessible, and even more impressive: compelling. I was especially taken with Thomas’s ability to detach her ego from her work. Her advocation for a more equitable world is definitively attached to her empathetic desire for a better world.

Thomas has been positioned as a pioneer in sustainability for good reason. However, she will be the first to tell you that her main intention is to cultivate a platform that shares space with other Black activists who have something important to say.

For a healthy dose of informative inspiration and a visual representation of our time together outside her flat in Ventura, keep on scrolling. To hear our full conversation, check out my podcast interview with Thomas on Woke Beauty. 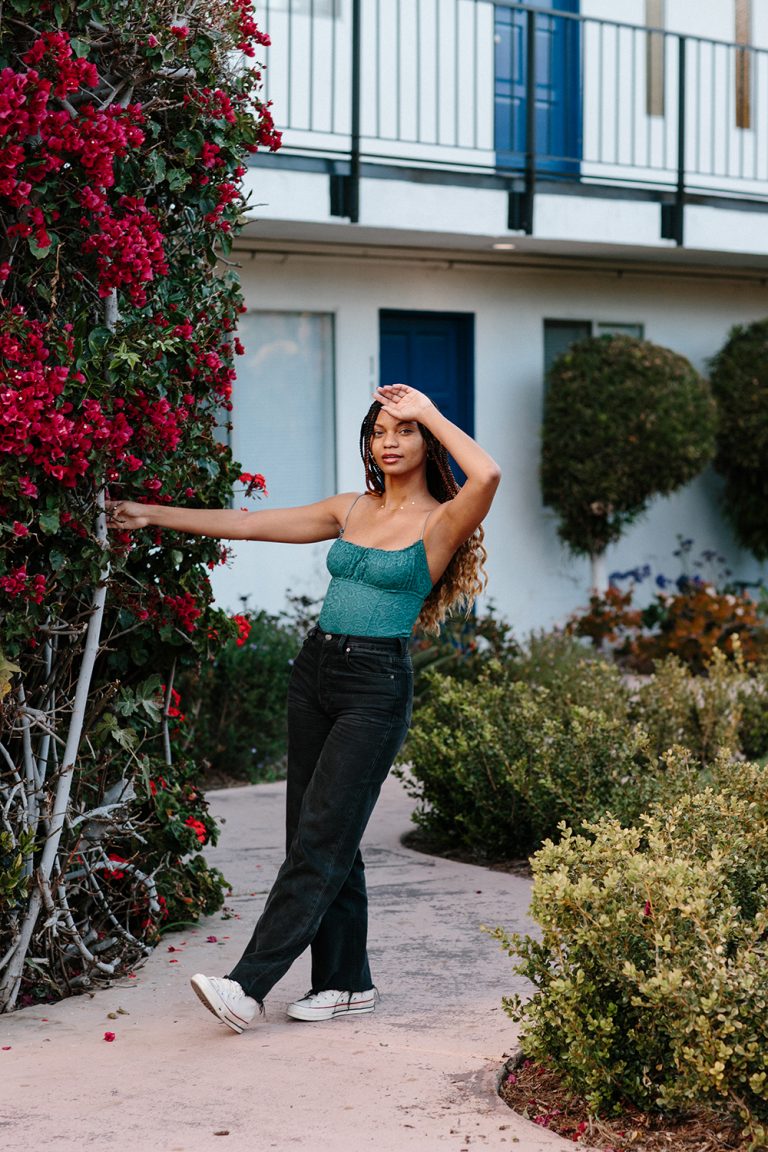 Navigating Home and the Classroom

Thomas grew up in a small suburb of St. Louis, Missouri called Florissant. When she talks about her roots, she speaks to the charm that surrounded her youth in the Midwest—a culture you don’t find in other places. Thomas jokes that her “little Midwestern heart shattered” when her fellow collegiate peer told her she didn’t have to say ‘hi’ to people so often. Lucky for us, her kind heart and sweet smile have prevailed.

Ironically, the distance between Chapman University and her hometown led to her exhaustive research in the connection between social justice and environmental justice. During Thomas’ sophomore year, Ferguson happened, sparking Black Lives Matter. Simultaneously, Thomas declared environmental science and policy as her major and began writing professionally. Thomas reminisces,

“It was really hard for me to focus. I would be in random classes while structures were burning down in Ferguson. I found myself more interested in social justice, more invested in the issues happening outside of the classroom. I didn’t know how to process my emotions so I began writing think pieces. My ultimate goal is to take big, complex issues wound up in social justice and environmental science and package them in ways that are accessible. College shouldn’t be a barrier to accessibility.”

The Meaning of Her Writing

When speaking about her contribution to the intersectional environmentalist movement, Thomas agrees that in many ways, writing is her form of activism. She adds, “Artists and creatives are responsible for the revolution that we’re seeing right now. Social media has raised awareness around Black Lives Matter and the climate crisis. Oftentimes, people try to discredit other forms of activism that aren’t holding the microphone and taking it out to the streets.

“For me, the pen and paper… that is my microphone. I want to show the younger generation that activism doesn’t need to look a certain way. We can all contribute whatever our strengths might be. It takes all of us.” 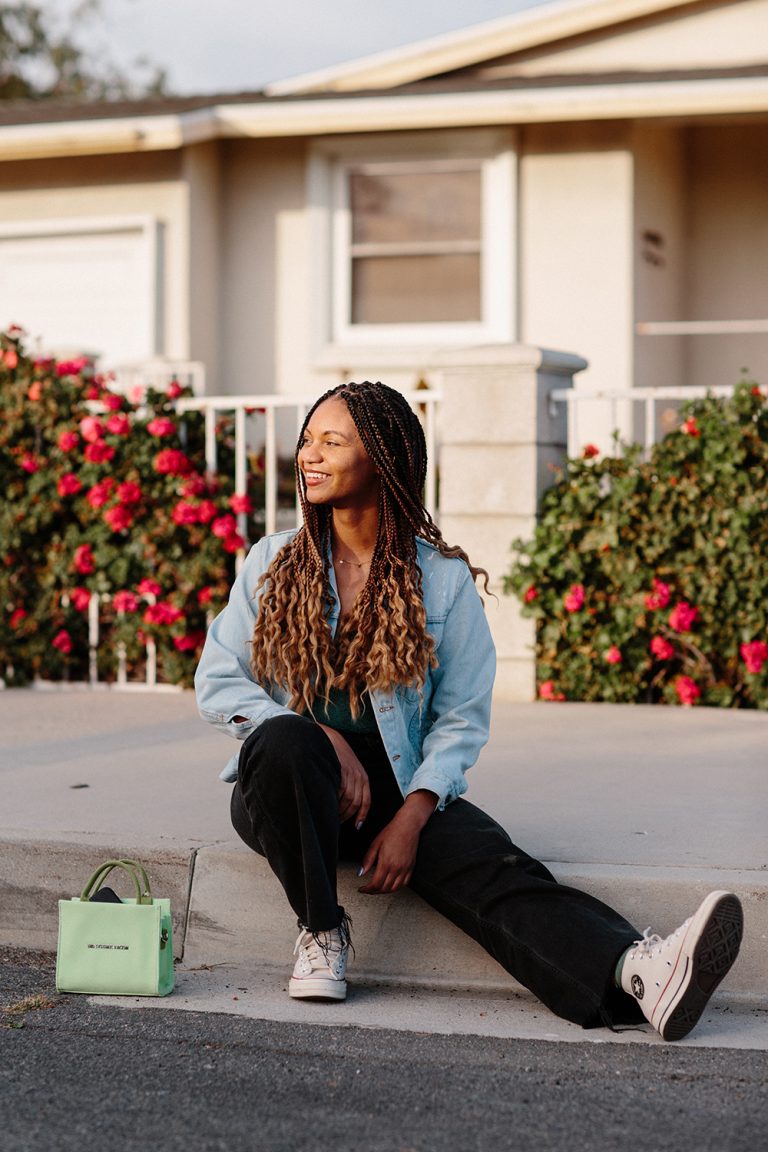 Social media can be exhausting, especially for those of us who use it to enact change. Thomas’s visibility expanded by thousands in a matter of days but you would never know that she was ever a rookie in the virtual space. She shows up on the platform daily with profound, thoughtful, engaging content. When asked how she manages the overwhelm of social media she says, “It’s been a struggle. A lot of people are nit-picky. They don’t like my nose, my hair, or my political stances. I try to set boundaries by not responding to every comment or even deleting comments if they’re inappropriate. I’m all for dialogue but I don’t have to give my emotional labor to things that I don’t see fit.”

We also talk about the dichotomy between standing out in a white-washed space while also feeling invisible as if your voice isn’t heard. It’s a delicate balance between finding the crack to let out the light while integrating your message so that it becomes normalized.

Thomas acknowledges that the mainstream media is positioning her and a select few others as the (light-skinned) Black girls in sustainability. She says,

“I am just one small expression of Blackness. My methods are not the only way to practice activism. Just because I have a certain outlook doesn’t mean other perspectives aren’t valid.”

While she is grateful for the acknowledgment as an esteemed environmentalist, she is also frustrated by the perpetrated colorism.

Thomas says her mom raised her to see herself as an intelligent leader before anything else. Evidently, she took on that role literally. But with sudden career growth, an overwhelming schedule, and continuous public speaking engagements have followed. So, I asked her point-blank: how do you deal with being tired? Her main tactics: delegation, taking extended time off, daily blocks of rest, and listening to her body.

Beyond the quantity of her work, Thomas is repeatedly involved with overwhelming issues that require immense fortitude. Eco-anxiety and social justice doom are real and daunting. With a big breath, Thomas says, “I permit myself to distance myself. Because, if I stay on Twitter all day reading trending topics, it becomes really overwhelming to the point of dehabilitation. At that point, I experience apathy rather than feeling connected to the things I care about.” Thomas works to create boundaries by reminding herself that there is so much good in the world, even if the news tells her otherwise. She practices gratitude for the things she has. She says,

“I’m just grateful to be able to see the sunrise and set every day. I allow myself to tune out so I can step away and experience joy. I think joy is an act of radical resistance to the world that we live in.” 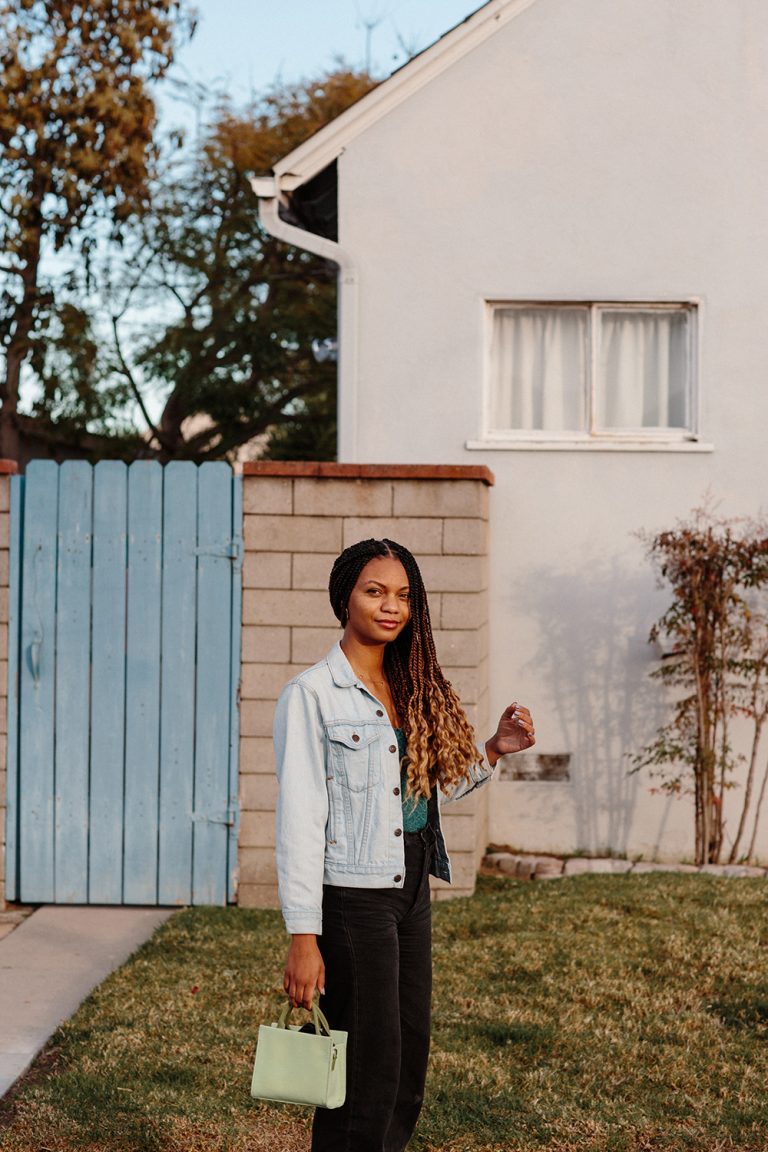 Advocating for Sustainability in BIPOC Spaces

When it comes to advocating for sustainability amidst the Black community, Thomas chooses to reclaim and revalidate cultural traditions that are inherently sustainable in the first place. As we continue to talk about the importance of acknowledgment within the BIPOC space, Thomas says,

“An exercise I like to do when I’m meeting with larger groups consisting of people of color is to ask them: what are some cultural traditions that your families practiced that might not be acknowledged in textbooks but that are, in fact, sustainable practices?”

“People start listing creative ways their relatives practiced sustainability: cookie tins repurposed for sewing materials, butter containers used for Tupperware, or thrifting—not for fun but because they had to. By acknowledging the methods people are already instilling, it sets them up to feel more empowered. When they feel empowered, they’re more likely to start thinking about the bigger picture which leads to research and advocation.”

Acknowledgment quickly becomes a running theme in our conversation around social justice and advocacy.

Thomas has a keen ability to see intersectionality in language. She speaks to the statement “I can’t breathe” as an overarching reality rampant in Black communities.

BIPOC spaces are disproportionately affected by police brutality, health care system negligence, CoVid-19, respiratory illnesses, and environmental injustices. Thomas notes, “Unfortunately, there are countless videos of traumatic Black deaths where people’s last words are ‘I can’t breathe,’ because they are victims of the excessive police force and violence that literally cuts off their airways. That speaks to an inequitable criminal justice system that makes it harder for Black people to breathe. And then, when we think about Black communities and communities of color being disproportionately exposed to particle matter or poor air quality, that is also making it harder for people to breathe. It leads to increased instances of asthma and respiratory illness, which is especially bad in a pandemic where we have a virus that is attacking the respiratory system and making it harder for people to breathe.

“If people can’t breathe, which is a basic need, how are they going to be able to thrive or experience joy in this world?” 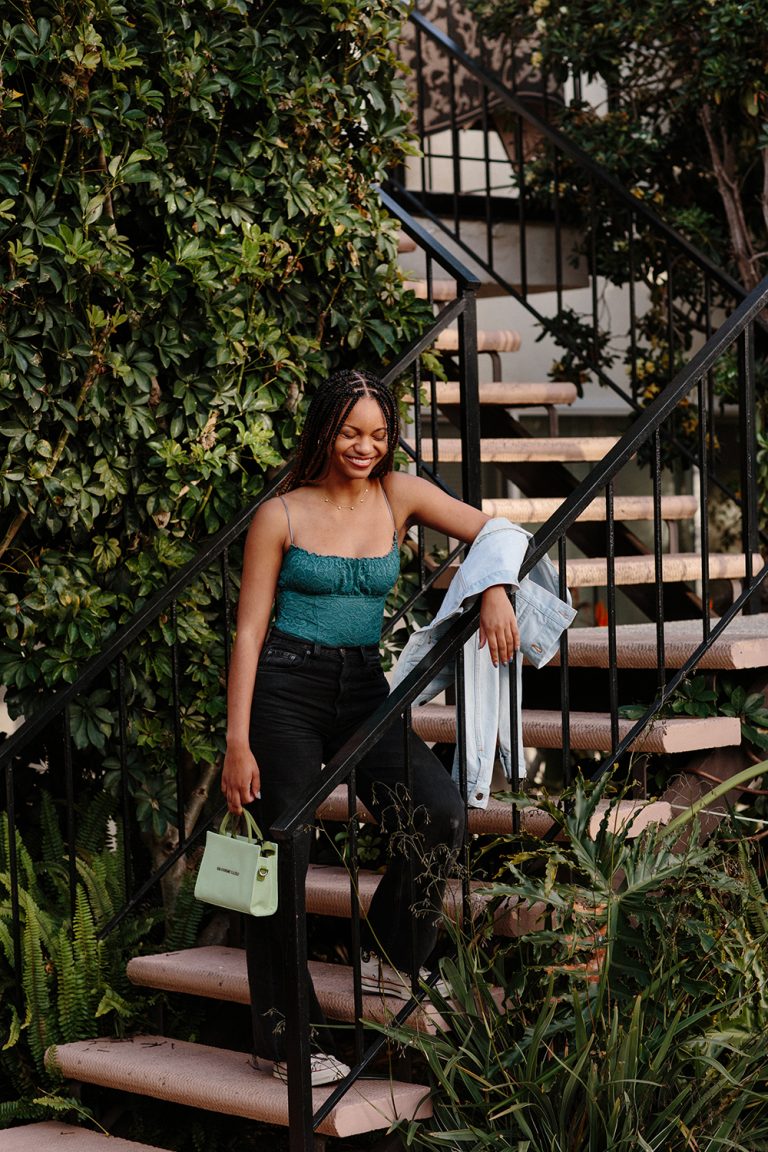 Throughout our conversation, I’m continuously amazed by Thomas’s poise. Despite the intensity of the topics we discuss, her tone of voice doesn’t alter, her mood doesn’t waver. She remains cool and collected. Thomas admits that she is a recovering perfectionist and has learned that progress is more important than perfection. While processing the empathy she gives to herself she has a moment of vulnerability, “I had a big failure early in my 20s when my first relationship ended.” She adds with a laugh, “It’s not like I want everyone to experience heartbreak but it helped me see what was on the other side of it.

“I learned to appreciate failure because it taught me so much about myself—who I want to be and who I don’t want to be. And I know the person I want to be isn’t perfect.”

As she continues to ponder personal growth, she talks about one of her mentors, Rick Ridgeway, a former professional climber, and the executive she assisted while working at Patagonia. She says the key characteristic she learned from Ridgeway is to not take yourself too seriously. “At the end of the day, I am still just a person.” 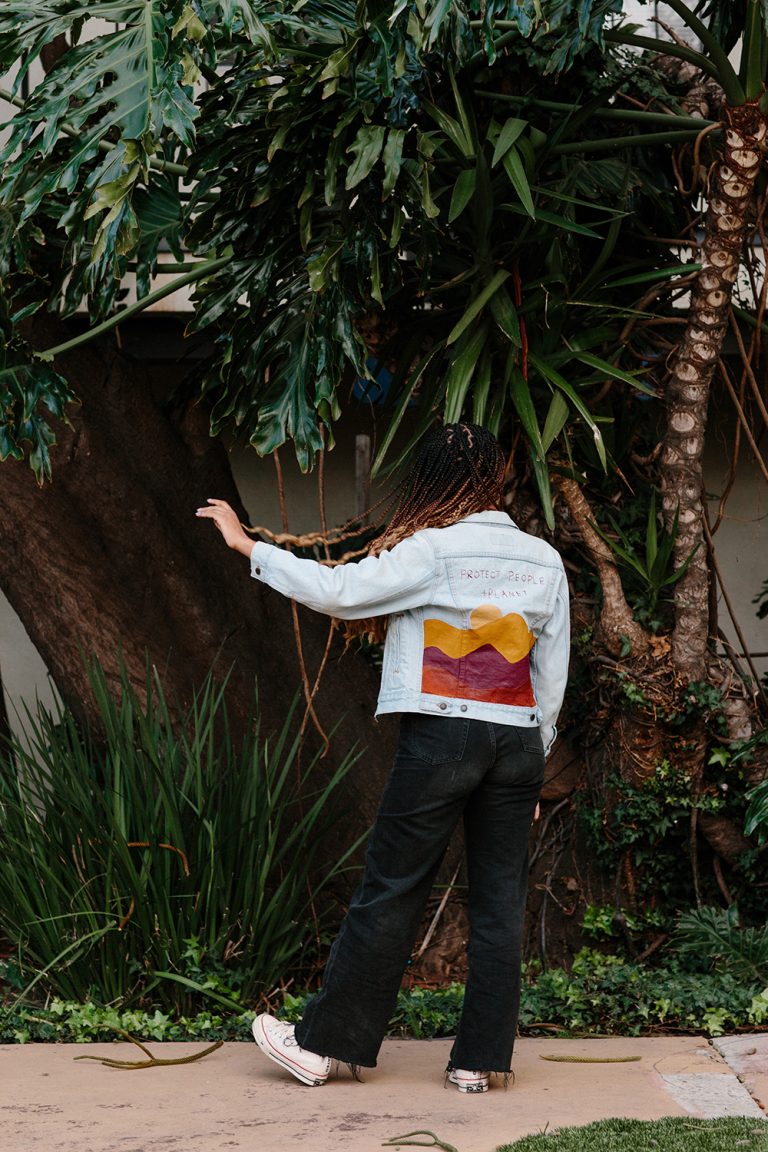 The Future of Sustainability

When I ask Thomas about the future of sustainability and some of her favorite at-home practices, instead of responding with a spreadsheet and a bunch of fancy brands, she approaches the question on a human level.

She tells me that her favorite at-home tool is a reusable saran wrap that she thinks she bought at Ross.

Her recommendations to those looking to contribute to the movement:

“Individual actions add up. If you tell yourself that doing something won’t make a difference, you’ll fall into paralysis. I would rather see a million imperfect sustainability enthusiasts than five militant people living perfectly and existing off of sunshine and water alone. That’s just not healthy. In addition to that, there is a gravitation towards regenerative agriculture and regenerative living right now; living in a way that replenishes our foundations.”