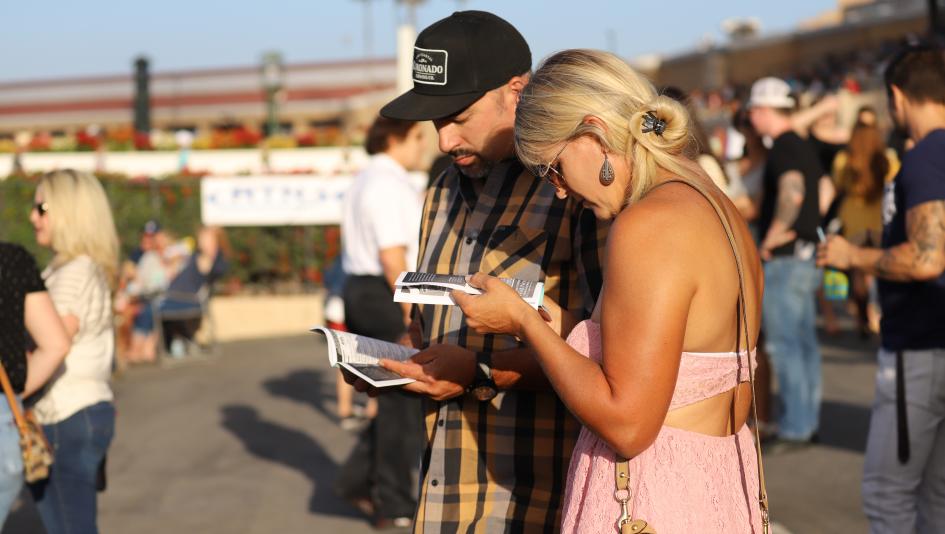 The $200,000, Grade 2 San Clemente Stakes brings together a field of 12 fillies led by Going Global, who was imported from Ireland to the United States this winter and has since won four straight stakes races on the turf, including the Grade 3 Honeymoon Stakes in May. Among the other 11, there are many with stakes credentials. They include Madone, who won the Grade 3 Senorita Stakes in early May before a sixth-place finish in the Honeymoon. Closing Remarks has finished first or second in five of seven career races including a close second behind Going Global in the Grade 3 Providencia Stakes this past April. Karakatsie ships cross-country from Gulfstream Park, where she just missed by a neck when second in the Martha Washington Stakes, while Pizzazz attempts to rebound off a fifth-place effort in the Honeymoon and run more like she did when winning the California Oaks.

Another with a good effort against stakes competition is Nimbostratus, who finished second in the Juvenile Fillies Turf Stakes last summer at Del Mar and finished third behind Going Global in the Grade 3 Sweet Life Stakes this past February. Tetragonal missed by a neck to Madone last October in the Surfer Girl Stakes and deserves some respect, as might California Oaks runner-up Freedom Flyer. Equilove imported to the United States in March and has won two of three since then; while Jibber Jabber was just second and beaten a half-length by Tetragonal, so she may fit in this race as well. Founder’s Day and Dramatizer round out the field.

Nimbostratus is my pick to post the upset over probable heavy betting favorite Going Global in this year’s San Clemente Stakes. After she was imported to the U.S. last summer, Nimbostratus showed she had a lot of talent when leading late and settling for second behind Madone in the Juvenile Fillies Turf Stakes at Del Mar. In her 3-year-old debut in January, Nimbostratus rallied for third behind Going Global in the Sweet Life Stakes, then shortened from a mile to six furlongs and ran the best race of her career, earning a 100 Equibase Speed Figure in the process. Following a poor effort in the Senorita Stakes in May (won by Madone), Nimbostratus shortened up again and bettered her career-best with a 104 figure effort. Jockey Abel Cedillo was aboard for the first time in that race and rides back. That race was an allowance-optional claiming race, and I’m pretty sure no one expected Nimbostratus to be claimed from that race as her price tag was $150,000, but she was. Now in the hands of up-and-coming star trainer Leonard Powell, who saddled Flashiest to win the opening day Oceanside Stakes last week, Nimbostratus can win the San Clemente if she repeats that last effort, as the 104 figure is on par with the figure that favorite Going Global earned in her most recent effort winning the Honeymoon Stakes.

Going Global doesn’t need much talking up as she’s won four straight races since coming to the U.S. in February. All were stakes and her consistent figures of 99, 95, 99, and most recently 104, show she’s holding top form. Off since the middle of May, trainer Phil D’Amato (who also saddles Equilove) has given the filly a series of steady workouts and as the most recent of those came on the Del Mar turf, this filly has every right to run another “A” race good enough to win under jockey Flavien Prat, who has been aboard for all four of her local wins.

Equilove fits at the level and may be a horse at higher odds near post time given the nature of this full field. She’s never run in a stakes race, but in her most recent effort earned her a 102 speed figure sprinting on turf, which demonstrates she fits with these as it’s nearly on par with the 104 speed figures Going Global and Nimbostratus earned in their most recent races. Equilove came to the U.S. over the fall and made her first start for D’Amato in March. She won that race nicely with a 94 Equibnase Speed Figure, then stumbled at the start in her next race and lost all chance but still managed to finish fourth. Next came the breakout race last month in which she led from start to finish under jockey Ricardo Gonzalez, who rides her today. Considering Equilove had won her first local start when fifth early and her most recent on the lead from start to finish, that kind of versatility bodes well for her chances to be in the mix at the end of this year’s San Clemente Stakes.

Honorable mention, and some consideration for bets we make involving this race, goes to Madone, Karakatsie, and Closing Remarks. Madone won the similar Senorita Stakes at a mile in May but the speed figure was just 89 so she would need to improve to be competitive. However, she won the first three starts of her career including two stakes, one at Del Mar, so that type of improvement is not out of the question. Karakatsie ran the best race of her career last month when second,  beaten a neck in the Martha Washington Stakes at Gulfstream Park, earning a 98 Equibase Speed Figure. She is on a pattern for even more improvement in the San Clemente. Closing Remarks has finished first or second in five of seven races, including her last four. All four were stakes on turf and, in one of those, the Providencia Stakes, Closing Remarks was only a neck behind Going Global so she has shown enough to be respected when considering exacta wagers in this race.

Chelsea appear more determined than ever to land an elite level striker this summer after lodging an enormous cash-plus-player...
Read
Fashion

Health and wellness apps startup Palta, has raised $100 million in a Series B round led by Per Brillioth...
Read

Chelsea appear more determined than ever to land an elite level striker this summer after lodging an enormous cash-plus-player bid totalling €100m in value,...

Health and wellness apps startup Palta, has raised $100 million in a Series B round led by Per Brillioth at VNV Global, with...

Chelsea appear more determined than ever to land an elite level striker this summer after lodging an enormous cash-plus-player bid totalling €100m in value,...
Read more

Chelsea appear more determined than ever to land an elite level striker this summer after lodging an enormous cash-plus-player bid totalling €100m in value,...
Read more