Colombian police have named a former official from Haiti’s justice ministry who they say may have been involved in last week’s assassination of the Caribbean state’s president.

Jorge Vargas, the head of the Colombian police, said that just days before the assassination of Jovenel Moïse, the official, Joseph Félix Badio, spoke to two former Colombian soldiers who have been blamed for the killing and said to them: “What you have to do is assassinate the president of Haiti.”

Vargas said this information had emerged during questioning of Colombians under arrest in Haiti. Badio’s whereabouts were unclear and he could not be reached for comment.

The announcement came hours after police in Haiti said they had arrested five senior officers from their own force as part of the investigation into the killing.

The head of the national police force, Léon Charles, said one of the men detained was Dimitri Herard, the head of Moïse’s security detail. He said about 20 members of the detail were now in custody and being questioned.

Moïse was murdered on July 7 when a hit squad burst into his private residence on the outskirts of the capital Port-au-Prince and fired 12 bullets into him. His wife Martine was seriously injured in the attack and flown to Florida for treatment.

Most of those arrested in connection with the killing are Colombians, some of them former members of the armed forces. Vargas said 18 Colombians were in police custody in Haiti, three were killed while trying to escape, and another three were on the run.

Two Haitian Americans were also detained immediately after the killing and last Sunday police arrested Christian Emmanuel Sanon, a 63-year-old Haitian émigré and accused him of “having taken steps with a private investigation firm to recruit the Colombian mercenaries for this mission”.

Sanon appears in a little-viewed 2011 YouTube video called “Dr Christian Sanon — Leadership for Haiti” attacking Haiti’s leaders for corruption and claiming he will bring hope to the country.

Haitian police have named the security company that hired the Colombians as CTU Security, a Miami-based company run by a Venezuelan émigré, Antonio Intriago.

The murder has plunged Haiti, the poorest nation in the Americas, deeper into chaos as politicians, business leaders and powerful gang bosses vie for power amid spiralling violence and dire food and fuel shortages. Moïse’s widow has accused her dead husband’s domestic opponents of organising the killing for political and business reasons. 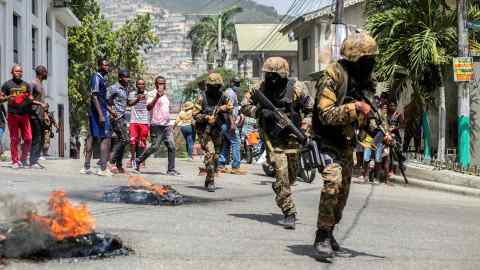 Moïse claimed before his death that he was fighting political rivals and local business tycoons angry at his attempts to clean up government contracts. However, the late president had himself been accused of corruption and of close links to the country’s powerful criminal gangs. He denied the allegations.

Claude Joseph, interim prime minister, has tried to assert control in the wake of the assassination, appealing so far without success for UN and US troops to help guard key installations.

In Washington, President Joe Biden said he had ordered marines to Haiti to guard the US embassy but that for now the idea of sending a larger contingent of soldiers “is not on the agenda”.

International powers are wary of deeper involvement in Haiti, which has struggled to find stability after decades of political turbulence and repeated natural disasters. The Caribbean island of 11m people is heavily dependent on remittances from Haitian expatriates and international aid.

Previous articleWeek Ahead – ECB On Deck As Stimulus Debate Heats Up
Next articleSugar in Fruit is Nothing to Be Worried About, Says An RD

For most athletes becoming world champion in their discipline is a life changing event, the culmination of a...
Read
Skiing

Wow. Crazy story this morning that I had no idea about. Legendary freestyle skier Bobby Brown announced on social...
Read

For most athletes becoming world champion in their discipline is a life changing event, the culmination of a lifetime of effort, focus...

Wow. Crazy story this morning that I had no idea about. Legendary freestyle skier Bobby Brown announced on social media today that he...

For most athletes becoming world champion in their discipline is a life changing event, the culmination of a lifetime of effort, focus...
Read more

For most athletes becoming world champion in their discipline is a life changing event, the culmination of a lifetime of effort, focus...
Read more